Lia’s four best friends have always been there for her, in good times and bad. It’s thanks to the loyal, supportive friendship of Marley, Abi, Makayla and Jules that Lia’s doing okay after her mom dies in a car crash.

But the summer before seventh grade, Lia’s feeling out of sync with her friends. And after a vacation up in Maine with quirky, unpredictable Aunt Shelby, Lia returns home to find her friends…well, different. For one thing, they’re fighting. Also, they’re competing. And some of them are making her feel like a “late bloomer.”

When her friends launch into a game of Truth or Dare, Lia tells a lie about her summer just to keep up with them. Then she tells another lie. And another. Soon it’s hard to remember what’s a lie and what isn’t. Friendships are threatened, boys are getting kissed (or not), and Lia’s wondering if there’s anyone to confide in. Surely not Aunt Shelby, who means well, but who can’t help being a force of chaos.

In this funny, touching coming-of-age story, Lia learns that it’s possible to face the hardest truths–as long as you have the right people by your side. 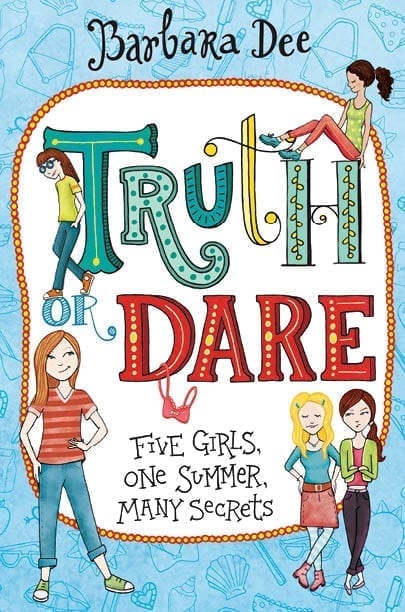 “The book’s structure and plot make for light and fast reading, but the characters are all interestingly flawed, including Lia, whose candid first-person narration allows readers to see trouble coming before she does. By the end of the book, the group’s friendships have been forever altered, but when the truths are revealed and the anger settles, all of the characters emerge as more empowered and independent young women.”

“Dee has a keen ear for middle school worries. Her characters talk and act like young adolescents…This is a good book to give to middle schoolers, especially young women on the verge of puberty. They will recognize themselves and their friends and may decide that when it comes to forging friendships, honesty works better than fanciful tales.”

“Although the characters are archetypal, they’re well enough rounded to add excruciating reality and believably illustrate one of the many forms of bullying. Lia’s problems ring fully true, and her eventually learned life lessons are timeless. Entertaining bibliotherapy but also a useful road map to resolution of the age-old problem of severe cattiness.”

“Dee captures the anxious intensity of a middle school friend group with crystal clarity and warm sympathy…The book offers plenty of understanding, with some extra wisdom for girls worried about facing the harbingers of adolescence.”

Bulletin of the Center for Children’s Books